Original vintage whiskey, wine and spirits trade magazine article for  ADVERTISING REGULATIONS ANNOUNCED more.  Administration releases the Thou Shalt's and Thou shalt Not's that will Govern Future Wines and Spirits Advertising.  Regulations include a general prohibition against any untrue statement in an advertisement of distilled spirits or wine or products of the Brewing Industry.  Old 1935 Post Prohibition era advertisement. less 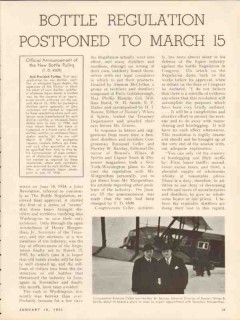 Original vintage whiskey, wine and spirits trade magazine article for  BOTTLE REGULATION POSTPONED TO MARCH 15, 1935 more.  Congressman Emanuel Celler and Hartley W. Barclay pictured, about to board a plane to meet with Secretary Morgenthau.  Official Announcement of the New Bottle Ruling.  Congressman Celler has been almost alone in his defense of the liquor industry against the bottle Regulation in Congress.  Old 1935 post prohibition whiskey article. less 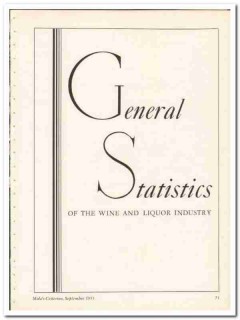 Original 1935 wine, whiskey and spirits trade vintage article titled GENERAL STATISTICS of the Wine and Liquor Industry more.  The tabulation which is included is one which we believe will be welcomed by each reader of Mida's Criterion. It was completed after weeks of intensive effort, and represents, we believe, the most complete presentation of statistics on sales of liquor by types and by states for the year ending June 30, 1935, that has yet been compiled, in fact, the only tabulation of this nature that has been made since Repeal. Grateful acknowledgement is made to Erwin, Wasey & Company, Inc, New less 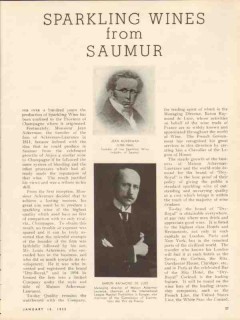 Original vintage whiskey, wine and spirits trade magazine article titled SPARKLING WINES FROM SAUMUR more.   Monsieur Jean Ackerman, founder of the firm of Ackerman-Laurance in 1811 decided he could produce in Saumur a similar wine to Champagne if he followed the same system of blending and other processes which had already made the reputation of that wine.  The result justified his views and was a tribute to his skill.  Today quality remains the watchword with the company with Managing Director Baron Raymond De Luze of Maison Ackerman Laurance, chairman of the International League A less