Sensational old History Books for sale including 150 Years of Worcester signed by Albert Southwick, Adolph Hitler, Anthology of American Negro Literature, Baylor at Independence by Lois Murray, Cambridge As It Was And Is Today by John Steegmann, Camera Eye on Idaho, 1904 vintage Civil Service Commission, Court Martial of the Bounty Mutineers, Delphian Text, German Defender by R. C. Duff, Going Great in the Lone Star State signed by June Rayfield Welch, Historic Virginia, Historical Atlas of the American West by Beck Haase, History of the Conquest of Peru by William Prescott, Houston Texas Study of Educational Unrest, Indianola signed by Brownson Malsch, Lynton and Lynmouth signed by John Travis, Map and Description of Texas, Mesopotania Yesterday Iraq Today signed, Peace War and You by Jerome Davis with letter from the author, Peerless Princess of the Plains, Stars Over Texas signed by Carolyn Adams, Texas Precinct Votes '70, Too Many Women signed by Paul Secord, United States through the Civil War by David Muzzey, Woodrow Wilson As I Know Him by Joseph Tumulty and many more.  Most of these books are vintage, out of print, some are signed.  They make magnificent gifts! 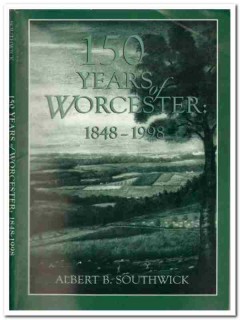 Soft covered book titled 150 YEARS OF WORCESTER: 1848-1998 Signed & inscribed by Albert B more. Southwick, Chandler House Press, Worcester, Massachusetts, 1st Edition, 1998, 95 pages. The book's three chapters describe the evolving city in Southwick's words and through 85 black and white photographs. From a leader in the Industrial Revolution in the nineteenth century to its current position at the forefront of the health care industry, Worcester has changed considerable since its early years as a city. This book is in VG+ condition,  pages clean and intact, and the binding is t less 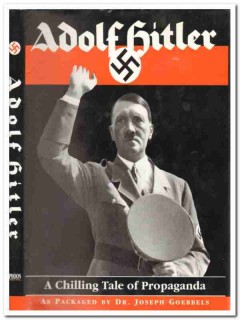 Hard covered book titled ADOLF HITLER Pictures from the Life of the Fuhrer A Chilling Tale of Propaganda As Packaged by Dr more. Joseph Goebbels Reprinted from a 1936 Edition, ISBN 1582790310, 133 pages, Printed in Croatia, high quality paper, cloth bound with silver lettering.  This book is published for historical purposes. It provides the reader with a unique historical glimpse of Nazi propaganda tools utilized during 1934-1936 as the Nazi party was acquiring popularity and acceptance in pre-war Germany. It is not intended to be a glorification in any respect of the Nazi party, its members, its vile dogma or less 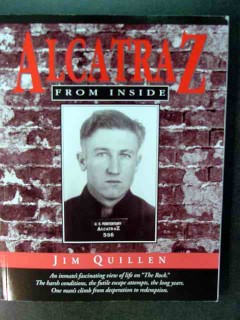 alcatraz from inside by jim quillen book

Soft covered book titled ALCATRAZ FROM INSIDE by Jim Quillen, 1991, 164 pages more. Follow Jim Quillen from his tragic childhood into a desperate life of crime that lands him inside the nation's most notorious prison. Witness the sensational Alcatraz Riot of 1946 and the bloody escape attempt that followed. Share Mr. Quillen's compelling story of life on Alcatraz - the cruel realities and dangerous alliances - and the hard road that led him back to freedom. This book is in VG+ condition, pages clean and intact, and the binding is tight. Don't miss the opportunity less 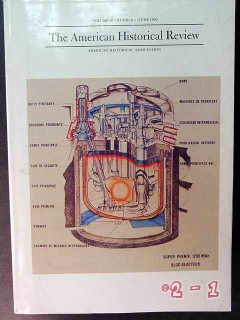 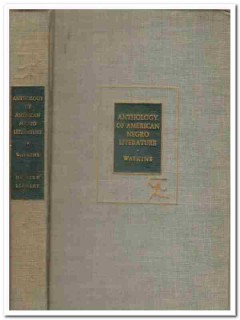 Hard covered book titled BANNED! BOOK CENSORSHIP IN THE SCHOOLS by Donald Rogers, 1988, 119 pages more. This book describes dramatic school book battles that have occurred in the 1970s and 80s. All these disputes have involved courtroom clashes. For Americans who are concerned about the meaning of the First Amendment, the decisions make important reading! This book is in VG condition. Pages clean and intact, and the binding is tight. It was a former library book and is stamped one the back page, outer page edges, and has library stickers on the front cover and on the cover page, along wi less 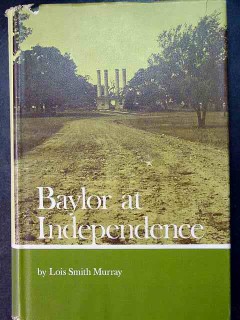 Hard covered book titled BAYLOR AT INDEPENDENCE by Lois Smith Murray, 1972, Baylor University Press, Waco, Texas, 421 pages more.The Republic of Texas was less than ten years old when the frontier territory's Southern Baptists resolutely resolved to create a university "to meet the needs of all the ages to come." This book is the first official in-depth history, covering the crucial and turbulent 1845-1886 era of the university's career at its birthplace. It is the detailed understanding but unvarnished story of Baylor's years at Independence. The wealth of illustrations includes Tom Lea's portrayal of Judge less 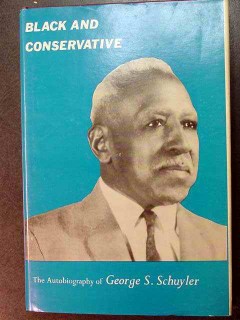 Hard covered book titled BLACK AND CONSERVATIVE The Autobiography of George S more. Schuyler 1966, 362 pages.In telling the story of his life, private and professional, George Schuyler give us frank insights into the world of a Negro journalist who refuses to cater to the myths and prejudices of either side in the tangled area of race relations. A stern realist, he excoriates the civil-rights agitators who would divide the country and increase resentment and hatred. An avowed conservative, he dedicates himself to preserving America's blessings.This book unfolds the author less 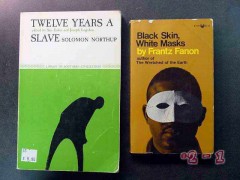 Soft covered books titled BLACK SKIN, WHITE MASKS by Frantz Fanon more. 1968, 232 pages. Former library book. The second book is titled  TWELVE YEARS A SLAVE by Solomon Northup, 1988, 273 pages.These books are in Good condition, pages intact, and the bindings are tight.  Underlining on a few pages of Black Skin, White Masks and pen marks on the cover, which is chipped at the edges.  Would make a great addition to your African American black history library! less 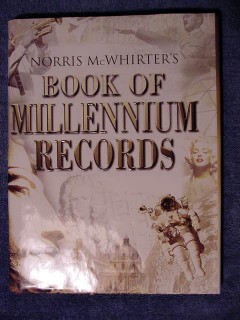 Hard covered book titled BOOK OF MILLENNIUM RECORDS by Norris McWhirter, 1999, 256 pages more. This is a fascinating look back at the historical milestones of the last 2,000 years. Subjects include: Everyday life The Arts Science Medicine and Health Politics and Government Building and Engineering Transport, War & Weapons Communications and the Media Sports & Leisure. It is in VG condition.  are clean and intact, and the binding is tight. There is an inscription to the previous owner written inside less 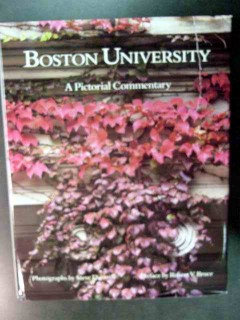 Hard covered book titled BOSTON UNIVERSITY, A PICTORIAL COMMENTARY more. Photographs by Steve Dunwell, Preface by Robert Bruce, 1989, 144 pages. This volume brings together the keen focus of a photographer and the personal reflections of a Pulitzer Prize winning historian whose perspective spans several decades as a student, teacher, writer, and member of the Boston University community. It is an inspiring record that captures a great university at a high point in its history. It is in VG+ condition, pages clean and intact, and the binding is tight. The dust j less 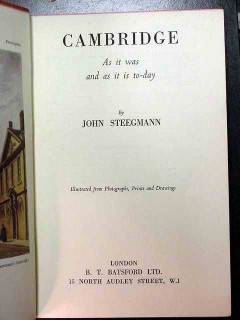 Hard covered book titled CAMBRIDGE, AS IT WAS AND AS IT IS TO-DAY by John Steegmann more. Illustrated from Photographs, Prints and Drawings First Printing, 1940, London England, 120 pages. Part I traces the growth of the University and Colleges, approaching the subject from the historic standpoint. Part II describes the colleges, university buildings and town churches as they now (1940) appear, approaching the subject this time from the architectural standpoint. Part III describes the Cambridge of to-day (1940) and tries to forecast that of tomorrow. This vint less 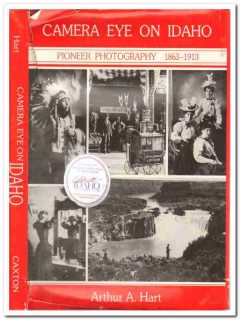 Hard covered book titled CAMERA EYE ON IDAHO Pioneer Photography 1863-1913 by Arthur A more. Hart, ISBN 0-87004-343-9, 1990, 201 pages. isbn 0870043439 This book combines a collection of photographs made of early Idaho people, places, and events with a history of photography in Idaho from 1863 through 1913. Extensive table in the back of the book list every professional photographer known to have worked in Idaho before 1913 as well as the towns where they had studios. In addition, there are photographs by gifted amateurs. This book is in VG+ condition,  pages clean and less 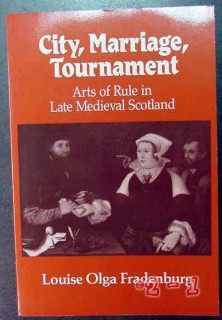 Soft covered book titled CITY, MARRIAGE, TOURNAMENT Arts of Rule more. in Late Medieval Scotland.  by Louise Olga Fradenburg, 1991, 390 pages.The author show the evolution of the arts of rule by examining the reigns of James III and James IV of Scotland, revealing in the process the fascinating political and artistic culture of late medieval Scotland. The vast tapestry of this book depicts an entire culture through its court poetry, royal charters accounts of bridal progressions, treaties on knighthood, and other previously unexamined texts, revealing the less 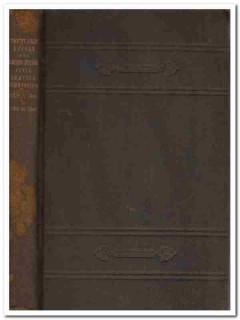 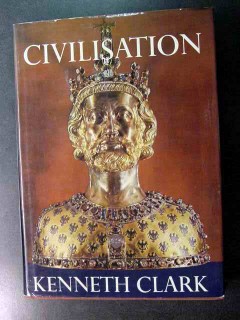 Hard covered book titled CIVILIZATION A PERSONAL VIEW , 359 pages, 286 Illustrations, 48 pages in color more. 1969.The impulses, ideas, discoveries and beliefs which have formed and nurtured Western civilization since the collapse of the Classical World are revealed in its works of art, its buildings, books and great individuals. Kenneth Clark has carefully selected illustrations that underscore the meaning of the text, to explore our history and culture through the diverse creative works of Western man. This vintage book is in VG+ condition, pages clean and intact, and the binding is tight. Don't m less